Landsbankinn intends to be a sought-after workplace, where employees can make good use of their ambition, initiative and abilities. The bank has introduced performance-oriented management methodology to promote a strong corporate culture where all employees bear the responsibility for success.

Through the years, Landsbankinn has promoted gender equality and published its own analyses of gender-based wages. In 2015 Landsbankinn became the first bank in Iceland to be awarded the golden seal of PwC's Equal Pay Audit and is the largest undertaking in Iceland to have received this recognition.

The bank emphasises ensuring wage equality and equal career opportunities. PwC's golden seal is an important affirmation of the status of gender equality in the bank and furthermore encouragement to the bank to maintain this situation. The bank's policy on gender equality states that in Landsbankinn both men and women shall have equal opportunities for career advancement and enjoy the same rights in their work.

The policy also states that Landsbankinn aims to have a gender balance among its employees, to prevent categorisation of work into male and female positions, and to have men and women paid equally for work of equal value. Mobbing, prejudice or gender-based or sexual harassment will not be tolerated.

Efforts are focused on encouraging a corporate culture which prioritises the customer, with close co-operation, continuous improvements and the shared responsibility of all employees for success. In 2015 the methodology of performance-oriented management was introduced to reinforce this corporate culture still further. In brief, performance-oriented management consists of focusing on what makes the greatest difference for success.

This methodology requires setting of clear targets by business units and employees, following-up on these targets and an assessment of how the success of individual units impacts the bank's overall objectives. Strong emphasis has been placed on the participation of all business units, with very good success.

Strong and capable managers play a key role in this future vision, both as active participants and examples to be followed. 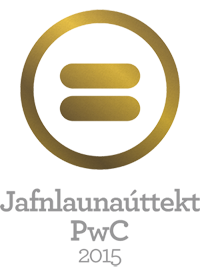 * Looking at the overall picture, I am satisfied in my work at Landsbankinn.

The managers' role in introducing this policy takes the form of a promise by managers, describing how they intend to work in the spirit of the corporate culture. They also follow a management model specifying what is expected of them as managers.

Landsbankinn uses a system of performance assessment. Each year each employee has a performance interview with his/her superior and receives a clear evaluation of his/her work, pointing out both what has been done well and what could be improved. At the core of this interview is the setting of targets, laying out the course for the coming year. According to a workplace audit employees are satisfied with these interviews and feel they deliver results.

Workplace Audit and the Bank's Pulse

Landsbankinn carries out a detailed workplace audit in the first quarter of each year and a less comprehensive one in the autumn. The latter is referred to as the Bank's Pulse and is intended to follow up on the targets for improvement set following the workplace audit. Together these surveys give important indications of employees' views regarding their workplace and their job satisfaction.

Landsbankinn regards the qualifications and expertise of its employees as a key prerequisite for success. A focused educational policy, variety of courses and encouragement to employees to undertake continuous education show that Landsbankinn is exemplary in its educational efforts for its employees. The bank's educational work follows quality certification in accordance with European Quality Mark, awarded by the Vocational Instruction Centre in Iceland.

In 2015 emphasis has been on training front-line employees in 360° advisory service, increasing the supply of electronic instruction and training for managers.

During the year 156 different events were held with around 3,200 participants. Each bank employee attended an average of 3 events on the instruction schedule. The majority of the bank's employees are active in continuing education, as 84% of them undertook some work-related education, either within or outside the bank. The average number of hours of instruction per full-time equivalent position in 2015 was 11.6 hours.

Landsbankinn regards the qualifications and expertise of its employees as a key prerequisite for success. A focused educational policy, variety of courses and encouragement to employees to undertake continuous education show that Landsbankinn is exemplary in its educational efforts for its employees.
2015 educational events by content
Employee participation in continuing education in 2015
Previous
Human Resources and Society
Next
Corporate social responsibility
Share on Facebook
Share on Twitter
Legal disclaimer
Appendices

This online Annual Report is published subject to reservations regarding possible errors. Should typographical errors, discrepancies or other obvious inconsistencies be discovered, Landsbankinn reserves the right to correct these and to update the online Annual Report accordingly in each instance.